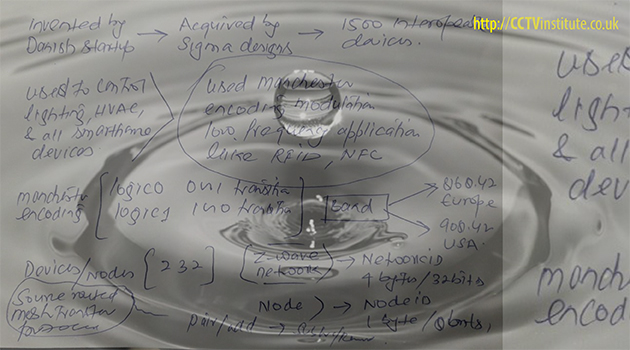 Hard work pays & smarter is better. So is the Z Wave, the communication protocol designed to transmit the data packets at 100 Kbps. A start-up namely Zensys founded by two Danish engineers, developed Z wave. Idea came simply in mind by developing something for their home, but something great was destined. The company started selling a chip for home automation, ASIC (Application Specific IC) together with their own firmware, hence an ecosystem for compatible devices of other manufacturers.  USA was the first big market for Zensys products, & Merten of Germany announced first Z wave based lighting system and finally Zensys was acquired by Sigma Designs in 2008.

Z Wave uses Manchester Coding Modulation technique, where encoding of each bit is high & low and vice versa with no DC bias hence self clocking, signal synchronizes by itself. This allows inductive as well as capacitive coupling. Due to nature of modulation, the coding is suitable for low level data transfer like RFID, NFC.

Analytically, Z Wave is defined as

This protocol uses source routed mesh architecture, the devices use intermediate nodes to actively route the signals. Let is assume the three nodes say A, B, C. In case A needs to communicate with C, if C is not directly reachable then A will communicate with B & then to C & vice versa.  So whatever the case, the signal will reach to target. The nodes are added to mesh by method of pairing or adding and can be removed by the same method.

Z Wave alliance is consortium of manufacturers & developers dedicated to the development & extension of Z Wave for smart homes.